this is where i live.

I am incredibly spoiled. The picture above is of my house. I usually have power and running water. This is mostly due to my mixed fortune of being a town volunteer.

This is the sitting room. I keep BBC playing a lot except when I’m listening to music or tuning in to local radio trying to improve my local language. Yes, I have an iron– because Ugandans place a lot of value on being “smart” plus there is this one kind of fly here that lays its eggs in clothes that are hung out to dry and the larvae can hatch under your skin unless you iron them to death. Gross, I know. I have been reading a lot, and luckily volunteers are really good about sharing around their books. My house is home to an informal eastern region volunteer library.

The hallway. I have put up all of the cool postcards and little comics I’ve gotten in the mail. There’s also a little sink just outside the bathroom.

My bedroom. There’s a cabinet in here where I keep my clothes, many of which I’ve had made by a tailor in town. I have put up all of the photos sent from home on the walls.

The extra bedroom. This is where visitors stay. Hint, hint. You can even take my room if you’d prefer. Notice the curtain’s fish-scale pattern. I had an outfit made with the remainder of that material.

The bathroom. This is Peace Corps luxury at its finest. The toilet usually works (which is not a given of toilets here in Uganda). The shower works, but is pretty chilly unless the water tank has been baking in the sun all day. So, in the mornings, after I boil my drinking water, I put the kettle in a basin filled with water. Once it has had some time to warm up, I use this water to take a “bucket bath.” This means that I use a smaller cup to pour the water over myself as I attempt to wash. When water is not running, for whatever reason, there is a pit latrine out behind the house. Use your imagination for that one– I’ll spare you a photo. 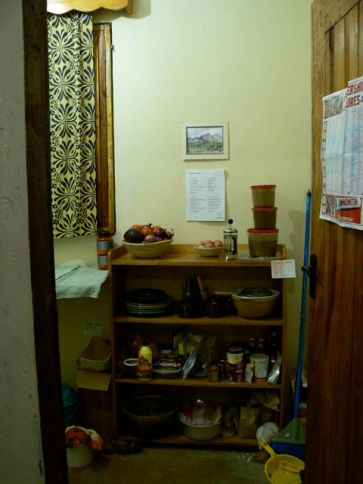 My kitchen. This is where the magic happens. On the left is my two-burner gas stove, which pretty much can make anything if I am creative enough with ingredient substitutions. I eat lunch at the office most days (which means some sort of starch–posho, millet bread, sometimes rice or sweet potatoes– and beans) but almost always make my own dinner. When I want to make something that would normally require baking, I construct a little oven using two large saucepans on top of a little charcoal stove. I have successfully used this method to make chocolate cake and banana bread, among other fun things. Also, I am getting a clay pot made that will eventually be in the kitchen for storing drinking water and keeping it cool.

The potholed dirt roads leading to my house are mostly overgrown with grass, despite the fact that neighborhood goats and cows tend to feast on them all day. There are a fair number of mud/thatch houses as well as some newer, fancier structures nearby. The little kids are beginning to learn my local name (Akello) and use that instead of just yelling “muzungu” whenever I pass, which is nice. (They still sometimes get overexcited and follow me, shouting, which is why I’ve been going running in the morning while most kids are in eating breakfast instead of in the evening when I attract a large crowd of followers.)

But while my surroundings are quite village-like in feeling and appearance, it is fairly easy for me to go into town to buy toilet paper or find an internet connection. Other volunteers in my district come into town to do their grocery shopping and use the internet, so I get to see them fairly often.

Those of us who live in and around Tororo prefer to describe it as “a paradise on earth where cotton candy grows on trees and waterfalls flow uphill,” but for those of you who would like a more factual picture, here are my impressions of Tororo:

I like my town. It’s small enough that I know people and always meet someone I know but big enough that I meet more new people each day than I can remember names.

The town is made up of a network of a bunch of streets clustered around a central roundabout. One of the streets is even lined with tall palm trees.

The main roads are always busy. The traffic is mainly composed of tractor trailers making their way from the Kenyan coast to Kampala with imported goods and fuel. The rest are mostly speeding matatus, the vans that are crammed with passengers being taxied from town to town, dodging the craters in the tarmac all the way. Occasionally a big bus flies by at an incredible speed, often causing me to fear it will topple over if it hits a bump at the wrong angle. Each vehicle kicks up a cloud of dust and dirt as it passes, coating everything and everyone in a dull orange-brown film. One of my favorite features of the vehicles here are the slogans that tend to be painted across the back. “God is able,” “Conquer or die,” “Insha Allah.” Many slogans concern themselves with the soccer teams of Europe. I saw a misspelled one the other day that said “WYNE ROONEY.”

There is a covered food market, where I can find pretty much all the fresh fruits and vegetables I could ever want. Behind that lies the secondhand clothing market, where I have managed to find some real gems that were discarded by their American owners. There are other stalls where they sell pots and pans, radios, baskets, watches, dried fish, brooms, flip flops, and pretty much everything else you could imagine which may or may not be useful. This is the lady I buy most of my vegetables from:

Pedestrian traffic is made up of all sorts of people going about their lives: women with babies tied to their backs, men on bicycles with giant bunches of bananas hanging from the handlebars, Kenyans bording taxis to head home across the border. On the corners, the sidewalks are populated with parked boda-bodas (bicycle and motorcycle taxis) and their drivers who are always eager for a fare. Tororo also has its fair share of street kids who beg and a handful of men who the residents call mad, who move around the streets in tattered clothing acting unpredictably.

When darkness begins to fall, the street food vendors begin to set up their small stations along the sidewalk. Once they’ve begun business for the night, town smells like what they’re selling: skewered roasted meat (chicken, goat, beef), small fried breads, chapati (delicious flat fried bread that, when rolled up with an omelette inside is called a “rolex,” I assume the name evolved from “roll-eggs”), fried cassava, french fries. Here’s my favorite chapati-maker at work:

There are a bunch of churches, many of them pentecostal, a few Indian temples (though I think Tororo’s Indian population was much higher before Idi Amin’s time), and a mosque. I like Fridays, because when I leave work I meet all of the robed foot traffic coming from prayers at the mosque. On Sunday mornings, little girls are dressed like little clouds in their puffy “Sunday best”, mostly dresses that were previously owned by little American girls in the ’80s.

For the most part things are relatively clean in the town center, where there are even some trash cans. But on the outskirts, there are trash piles, which stink. Animals pick through them, and occasionally they are lit on fire and emit the unmistakable smell of burning plastic. I have even given directions to my house based on how many trash piles you pass along the way.

I can’t finish without mentioning Tororo Rock. It sits just next to the town center, and I live right next to it. It is a volcanic plug, which is rocky, covered in trees, and really quite pretty (especially if you squint and cancel out the cell phone towers that are up on the top).

About a month ago, I got to climb to the top of the rock. From there, I looked down at the green of banana plantations and maize fields, the reddish-brown scars where men have carved roads out of the landscape, and the blue and grey of the Kenyan mountains on the distant horizon.

The sunsets around here aren’t bad either.

7 Responses to this is where i live.